In ‘Mittelweg 36’: how photographs of lynchings were used against the perpetrators; the history of hunger strikes at Guantánamo Bay; and the resistance of an engineer scapegoated by the GDR regime.

Critique of the Recovery Fund

Resistance to power is usually understood as a collective, spectacular phenomenon. Popular protest in Belarus, Hongkong and Myanmar – to cite recent examples – have rightly received international scrutiny. But the same cannot be said for acts of resistance that take place in concealed spaces, for example prisons, detention centres and torture chambers. And for different reasons, one hears little about individual acts of resistance that do not qualify as public protest. The new issue of Mittelweg 36 contributes to redressing this imbalance.

‘Long before “voice” gained political weight and became a legal right for white, western males, exit and voice were probably the most important means of self-liberation and political articulation,’ write cultural scientist Iris Därmann and historian Michael Wildt in their introduction. ‘Exit and voice, fugitive and performative resistance, are arts of not-saying and not-doing. Acts of resistance do not take place in hermetic spaces; they react to specific experiences, spaces, structures and holders of power. Active and passive resistance alike are always directed against something.’ 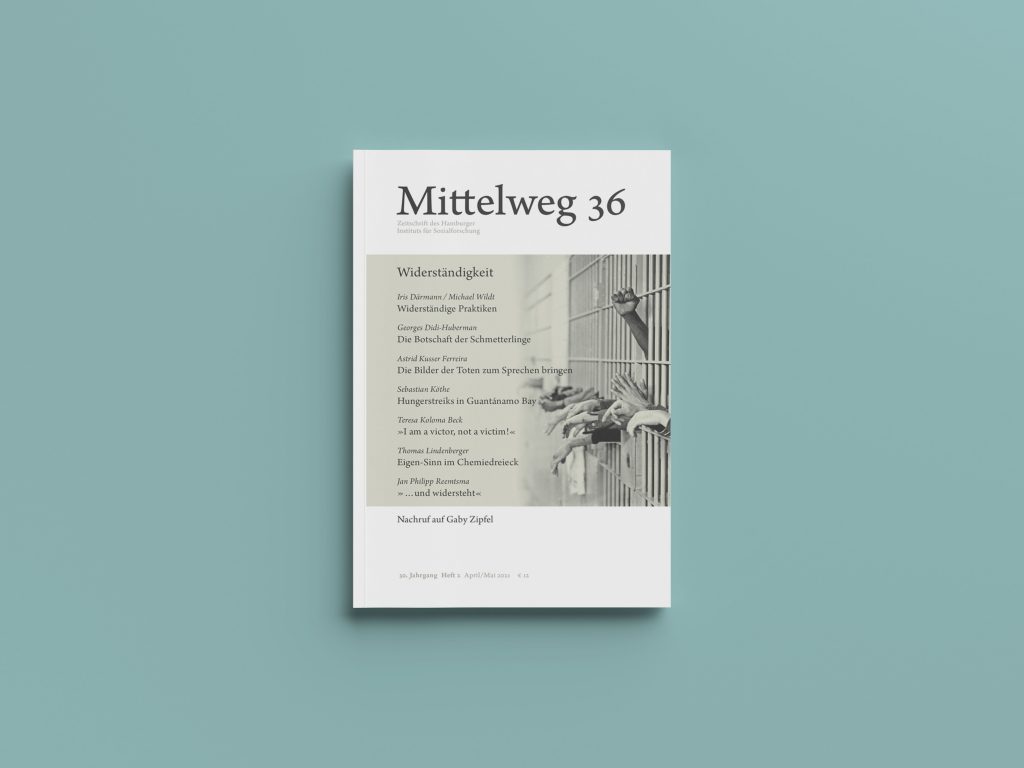 Astrid Kusser Ferreira examines how photography came to be used against the perpetrators of lynchings in the USA at the turn of the twentieth century. Photographs of lynchings, Kusser Ferreira explains, originally served to portray the perpetrators as the executors of retributive justice, and were framed in such a way as to portray the lynch mobs as orderly and legal. Gradually, however, civil rights campaigners such as W. E. B. Du Bois and Ida B. Wells began to subvert this function of photographs of lynchings.

The most of important strategy of the publishers of Crisis, the organ of the National Association for the Advancement of Colored People, was to emphasize the political character of lynchings and to make clear that they were not isolated events. ‘Crisis often published photographs of lynchings showing perpetrators and spectators presenting themselves to the camera … The photos were intended to disrupt conventional discourse about lynching and to expose the prevalent double standards; they did not illustrate the problem so much as analyse it. It was about collecting evidence and making the perpetrators and spectators visible.’

Thomas Lindenberger describes the lone resistance of fined and imprisoned Franz Wagner, a GDR engineer scapegoated by the regime after a gasworks’ disaster. After being coerced into joining the Stasi, Wagner was released early and worked as security expert. When the fines were dropped, he detached himself from the Stasi and in 1990 took his case to court, where he was officially pardoned. Wagner was clearly not a dissident in the conventional sense, writes Lindenberger, however he was someone who insisted on his power of agency and who, in his own way, refused to serve the system.

Also: Sebastian Köthe on the history of hunger strikes at Guantánamo Bay, focusing on the case of Sami Alhaj, an imprisoned journalist who illustrated in his diaries the physical effects of his hunger strike.

This article is part of the 7/2021 Eurozine review. Click here to subscribe to our weekly newsletter to get updates on reviews and our latest publishing.

A chronicler of human complexity

Scapegoated early on in the pandemic, Roma communities do not get the full support they need to participate in vaccination campaigns. Distrust of inaccessible health care systems, built to exclude minorities living outside the mainstream, is a major obstacle.

For many, place of birth is an identity keystone. That first point of arrival seems assured, an irrefutable fact. But there are those made to feel foreign in their home country. Race, often seen as evidence of difference, forces many Black people to undertake personal journeys into identity politics.